Toronto’s real estate market has been complicated, and it’s likely going to stay that way for a little while, but it’s not as dire as many have speculated. As one real estate agent pointed out recently, there’s a lot to talk about in terms of average prices, trends, and the types of homes for sale.

Re/Max real estate agent Kayla Scott (kaylascott.ca) has a very good commentary about the market fluctuations, and as she points out, condo sales are having an impact on the discussion of average price.

The Toronto Real Estate Board reported February sales were down 35% from February of last year. Get used to it: we will be reporting the same story for at least the next couple of months. However, what the media seems to focus on is the decline in average prices – that’s the average price of all sales on TREB – and it is down by 12% from February of 2017. But average price is dependent on the ‘mix’ of sales. If more smaller properties are selling, even if their prices are rising, then the average price will fall. That leads us to a discussion of the condo market.

You would think that rising prices would lead to increased sales. That’s what economists tell you. But, the reality for real estate is that people will not move/sell if they have no place to go! For owners, the double land transfer tax makes staying put and renovating more attractive. For Investors, they are having difficulty in selling units that are tenanted, and rent controls make it worse.

As already mentioned, Downtown condo prices have increased about $200/sf over the last twelve months – that’s over 20%. We believe that type of increase is unsustainable over the long term. Annual sustainable price increases should be in the 3-4% range. So, don’t expect prices to decline but do expect a flattening. 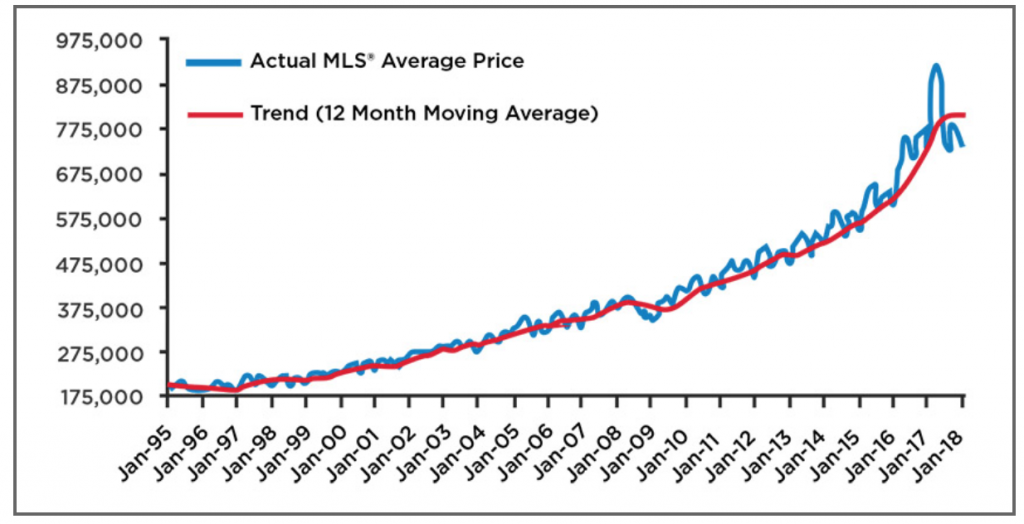